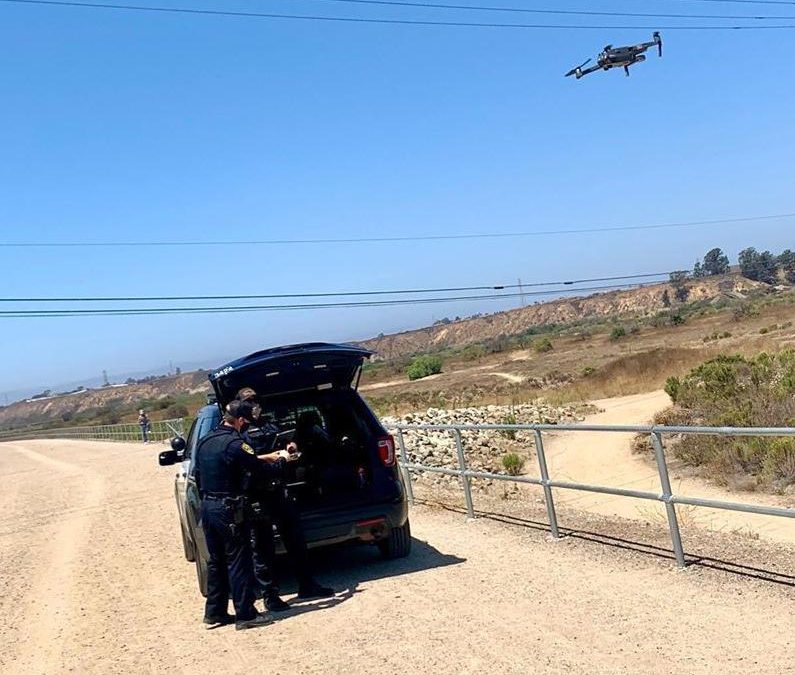 For the first time in department history, Santa Maria Police used a drone, or unmanned aerial vehicle, to seek out a suspect hiding in the riverbed over the weekend.

Use of the drone resulted in the arrest of the stabbing suspect, according to Lt. Terry Flaa, who oversees the drone program that was developed over a period of about three years.

The Santa Maria Police Department is one of the only law enforcement agencies on the Central Coast that utilizes drones to provide aid in certain operations and to keep officers safe, according to Flaa.

“It’s safer to search from the sky than on the ground,” Flaa said.

Police use of drones goes back at least 15 years, although advancements in technology over the years has made them smaller, easier to use and led the Federal Aviation Administration to issue a December 2015 rule requiring small drone operators to register.

Developing the program has taken years due to several reasons that included time required for Santa Maria Police’s two-person drone team to earn the licenses required by the FAA. Social distancing and other COVID-19 health measures also slowed progress, according to Flaa.

Additionally, Santa Maria Police had to develop a drone policy that preserved the civil and privacy rights of Santa Marians.

The Santa Maria drone team used the aerial vehicle for the first time Friday after police began searching for 35-year-old Adam Martinez, who allegedly stabbed his girlfriend and fled into the Santa Maria riverbed, according to Flaa.

Police weren’t successful in locating Martinez on Friday night but returned the next day to deploy the drone once more.

This time, they conducted a methodical search of the bridge and within 15 minutes spotted Martinez hiding under the bridge.

The drone followed Martinez as he walked back to an arrest team waiting for him near Preisker Lane and the levee.

He was booked into Santa Barbara County Jail on suspicion of attempted murder, false imprisonment, physical injury to a spouse or co-inhabitant and parole violations.

“Knowing the challenges of sending officers down in there directly, especially with the vehicles we have, it was a good opportunity to deploy the unmanned aerial system team,” Flaa explained.

Each drone is equipped with a camera, spotlight and speakers. The department has a set of drones optimized for nighttime operations and another designed to fly during the day. Battery life lasts roughly 25 minutes, although a drone can be swapped out to let the other recharge in order to maintain operational continuity, Flaa said.

The SMPD drone operators only have earned one license so far, which prohibits them from flying at night or over populated areas. Officers were able to bypass restrictions for the Friday night flight after receiving an FAA emergency waiver.

Further certifications would allow Santa Maria Police to fly drones in certain conditions, including controlled airspace, at night and over populated areas.

In addition to catching suspects, the drones will be used for other operations that include search and rescue, locating at-risk missing people and as a de-escalation tactic.

An SMPD arrest team was staged on the levee ready to pursue Martinez in the event he fled.

“With crimes like this, oftentimes suspects will direct aggression or violence towards officers,” Flaa said. “But because of the other set of eyes in the sky, the suspect reconsidered his plans and options, so it was a win-win for everyone.”

Other departments on the Central Coast that use drones include Morro Bay Police Department and San Luis Obispo Police Department, which recently utilized them to track Black Lives Matter protests.